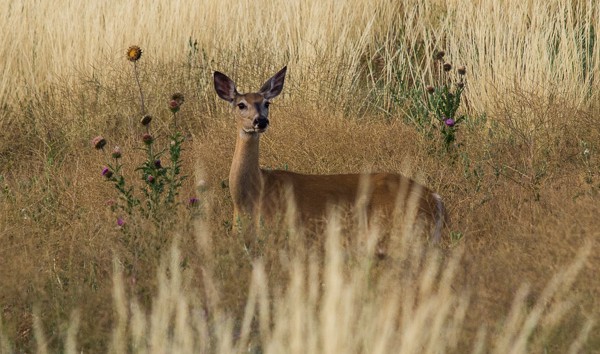 I was fascinated by mountain goats when I saw them first in Glacier National Park in Montana some years ago. Against the dark mountainside they looked so white and bright; they appeared as small, white dots in the most improbable places. Wide, cloven hooves equipped with rough pads, the equivalent of climbing shoes, give them outstanding grip on to steep rock faces. Mountain goats are powerful, but nimble too. They can jump more than three metres in a single bound. On Logan Pass, there were so many tourists that the goats were quite tame, and easy to photograph. Back then, though, I was using slide film.

These animals are not true goats, but closely related, somewhat like antelopes. They inhabit mountains of the northwestern United States and Canada and are well adapted to high altitude conditions and steep country. Their scientific name is Oreamnos americanus, the genus derived from Ancient Greek meaning ‘mountain lamb’. There are no other species in this genus, making the mountain goat unique. They are ancient, too, dating back to at least the Pleistocene.

I photographed these individuals high up on Mount Evans in Colorado, where they are also easily seen and not difficult to approach. Mountain goats were first introduced to Mount Evans from Montana in 1947. There are fossil records of an extinct species of mountain goat from South Park, in Colorado, but the extant species is not native to the area. While hunters and wildlife photographers welcome this extension of the mountain goats’ range, biologists have argued that its introduction may disrupt the fragile ecology of high altitude areas of the Colorado Rocky Mountains and threaten native plant species growing there.

The black tipped horns can be seen clearly in this image. They continue to grow during the animal’s life, producing annual growth rings. Male and female mountain goats are not easy to tell apart, as although males tend to be larger than females of the same age, their horns are much the same length. There are subtle differences in the horns, however, as females tend to have horns that curve more sharply towards the tips while horns of males are evenly curved throughout their length. In addition, mature males tend to be larger than mature females and more heavily built through the shoulders.

In winter, mountain goats grow and extra layer of wool, which has longer, hollow fibres that provide a lightweight but very warm coat. In spring, as the temperature rises, they shed this outer layer.

From atop Mount Evans, a fourteen thousand foot peak, the views go on for ever, provided the distant mountains are not obscured by smoke from fires. These photographs were taken in August 2019.